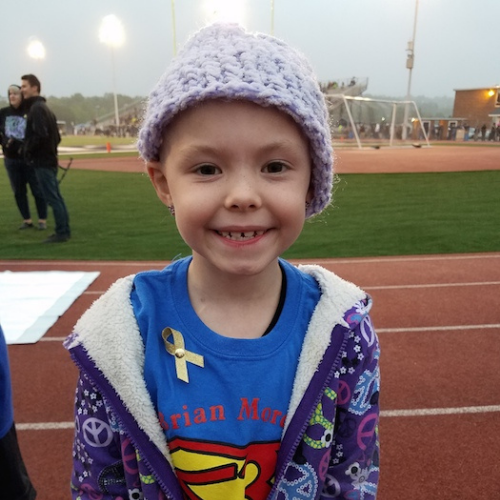 Addison Zearfaus was diagnosed with “high risk acute lymphoblastic leukemia” on May 16, 2016.  On a Sunday afternoon, she presented with dizziness and a very high fever.  A trip to the pediatrician, the next day, turned into a trip to the Altoona emergency room.  Shortly thereafter, we were practically in shock as we heard the phrase “your daughter has leukemia” come from the doctor’s mouth.  The doctor informed us that she was being flown to Children’s Hospital in Pittsburgh within the next hour and we needed to decide as to who is going to fly with her and who will be going home to inform the family and travel there by car. Jessica (mom) flew with her while Mark (dad) had the burden of telling family and friends what was happening.  Our life changed literally in one second.  Our pastor was immediately informed and a prayer chain formed.  Our pastor was at the hospital later that evening to help up cope and be there for support and prayer.  She was initially put on the ICU floor due to high fever and, basically, her fragile state.

That week was pure torture as she was not permitted to have any medicine to bring down her fever.  (They don’t want the fever “masked” by medicine).  She was packed with ice bags to try to keep bring her temperature down.  She was so sick and did not understand what was happening.  She started chemotherapy; had an I.V. port surgically inserted in her chest; and began her fight against childhood cancer.  She spent a few weeks in the hospital; came home; and then ended up back in the hospital for about a month because of her low immune system. 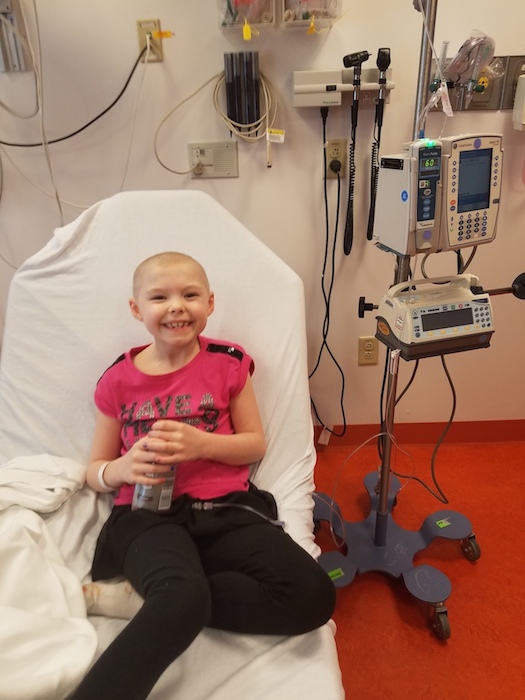 It was a major blow to our family when this happened.  In addition to crying about a billion tears; Jessica and I both missed a lot of work because we were at the hospital so much.  Jessica (mom) took 9 months off of work without pay to be there with Addison, including overnights at the CHP that would sometimes be one day, a few days to even weeks.  Addison had several fevers and we had to drop everything and take her to our local emergency room where they would be directed by the oncology staff from CHP as to what tests that wanted done and what medications, if any, were to be administered.  If her counts ended up being too low, we ended up in Pittsburgh at Children’s Hospital for a few days.

Addison has been through hair loss; which she handled very well. She has become very responsible in taking her medications when she is supposed to.  This came in time but she is literally a pro at what and when to take her medication. 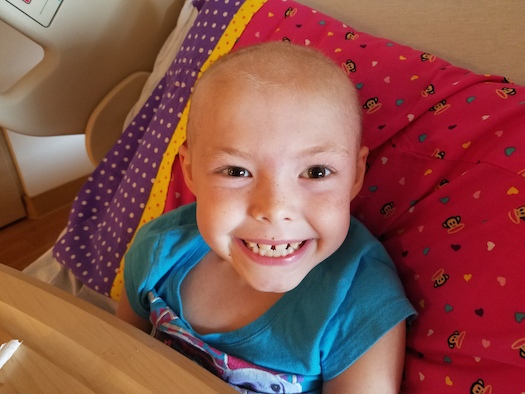 Setbacks have happened and they are frustrating.  We have learned a lot about dealing with life as it happens.  About six months into treatment there was a shortage of one of her I.V. chemo drugs.  The drug was only available in shot form; so, she had to be taken to Pittsburgh every 48 hours to get the shot.

Here is another heartbreaking fact that we were faced with.  95% of children with her type of Leukemia (ALL) will go into remission after the first phase of treatment, which is 30 days.  The treatment continues for up to three years to keep them in remission.  Unfortunately, Addison was in the 5% of children who did not go into remission after 30 days.  This then put her in the “very high risk category”.  Her oncology team of doctors decided to continue to the next phase that was another 2 months.  They would test her again after that.  If she was not in remission at that time, then her ONLY option would be a Bone Marrow Transplant.  Through the grace of God, she did go into remission after 90 days of treatment versus the more favorable 30 days.  We count our blessings every day that this is the road God chose for us.

This past September, Addison’s I.V. port stopped working and she had to have it removed and another one put in which is a major surgery.  And because of the ultrasound she needed done, prior to replacing her port, the doctors found a blood clot.  Fortunately, this clot was not life threatening but needed to be treated.  She has been on a blood thinner shot twice a day since the beginning of October 2017 and her clot is still not gone.  Jessica (mom) was trained in Pittsburgh on how to give her the shots and Addison gets then at home twice a day every day. 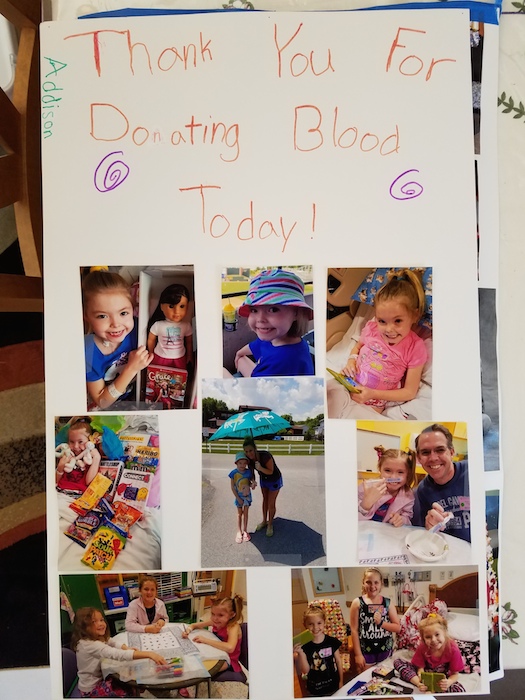 The very first week Addison was in the hospital we were contacted by the Brian Morden Foundation.  We had never heard of the Brian Morden Foundation; but a woman named Dawn Morden told us that Addison was now one of “Brian’s Kids” and that they would be there for us through this journey.  And they truly have been.  We found out that one of our close friends referred Addison to the BMF and that is how they got Addison’s name.  At that point, I faintly remembered this friend saying “can I give your name to this foundation that can help you.”  The Brian Morden Foundation helps local families of children fighting pediatric cancers and tumors with cards, gifts, “Brian Bags” on holidays and donations to fund cancer research.  They are involved with the Altoona Curve Game of Hope and high school athletic events (Sideline Cancer Game) that raise money and awareness for childhood cancer.

Upon diagnosis, we did immediately feel the support of the Brian Morden Foundation, Addison’s school, our church, the legal community, and complete strangers.  The court cleared Mark’s schedule for as long as he needed; the legal community started a fund raiser and organized a blood drive; so many people sent gifts and cards that just touched our hearts.  Jessica’s employer worked with her on what forms needed to be completed so she could be off with her. 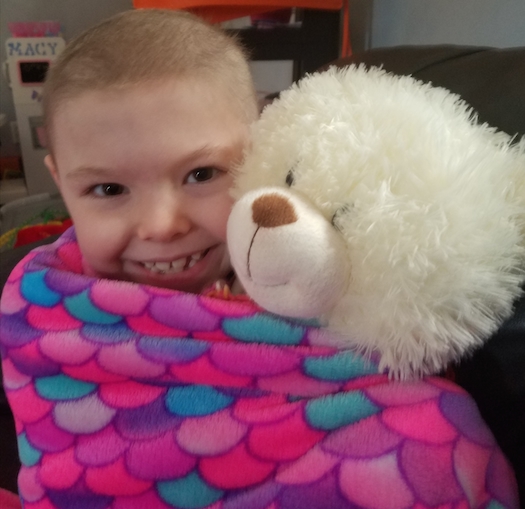 Dawn Morden has constantly stayed in touch with us on behalf of the Brian Morden Foundation.  The Foundation has given us gas cards to help with getting to Pittsburgh, grocery store gift cards, and gift cards to Addison’s favorite restaurant’s.  This is in combinations with the “Brian Bags” that is filled with all Addison’s favorite things and goodies to eat.

At first, we were hesitant with accepting all this because we felt like another family may need it more than ours.  We were clearly still not in the acceptance phase yet.  But I remember clearly the conversation I (Jessica) had with Dawn and she said to me “this is your time to accept that people love you and your family and they want to help.  Once your chapter is over, and Addison is done with treatment, it will be your turn to help others who are just starting this battle.”

Since Addison cannot attend school right now (too many germs for a child with cancer) the school district sends a teacher to our house three times a week.  She has had the same teacher since 1stgrade (she is now in 3rd).  Her teacher is amazing and we feel so much love from her too.

In December 2018, The Make-A-Wish Foundation granted Addison’s wish to swim with a mermaid in Hawaii and play with dolphins.  Addison loves being a mermaid, and keeps her muscles strong by swimming with her mermaid tail in our pool.  She wants to be a Marine Biologist when she grows up. 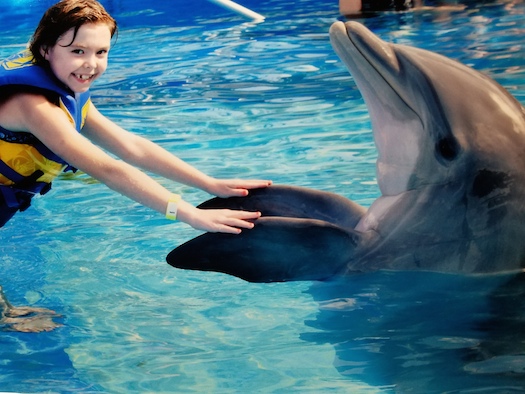 Addison has a twin sister named Bailey and a big sister named Macy who is 12.  Addison and Baily will be 9 years old on January 26, 2018. 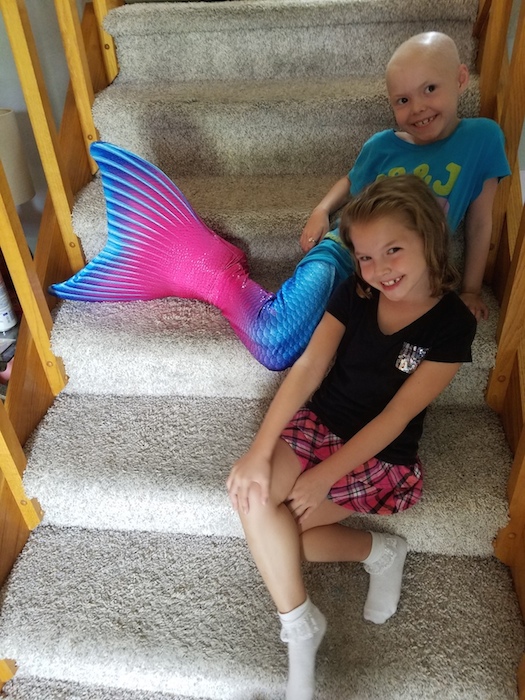 Important additional Information in the Spotlight:

Leukemia occurs most often in adults older than 55 years, but it is also the most common cancer in children younger than 15 years.

Children with leukemia, non-Hodgkin’s lymphoma or certain solid tumors tend to have a good outcome.